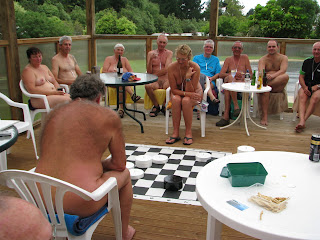 The Supporters get-together at Katikati Naturist Park was well attended by Supporter members from as far away as Kaitaia and Cromwell and as well as BOP Naturists. Mind you, most of the Supporter members there were also BOP Naturists and if they weren’t before, they are now! The weather looked ominous to start with, so we concentrated on indoor games, but as it turned out, it was even warm enough for me to have a swim (and that doesn’t happen very often in a pool under 32oC)! In fact, when Col saw me in the pool he said “What are you doing in there!” Col did a great job organising the events and cooking the catered breakfast, and my quiz had a few scratching their heads. We played table tennis, draughts, chess, frisbee golf and pool (eight ball variety). The kids played frisbee golf, said the treasure hunt was ‘awesome’ and wrote some great poems about their weekend at Katikati. The pool and spa were well used and all in all, the weekend was a great success
Posted by Glenne at 12:09 AM

Email ThisBlogThis!Share to TwitterShare to FacebookShare to Pinterest
Labels: Draughts in the gazebo