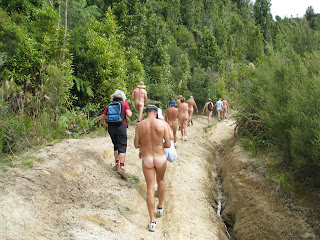 Although most members didn't know where we were going for our mystery weekend, 26 turned up for a great weekend at the Bay of Plenty Sun Club.
The participants had to look out for clues along the way and then pick up more once they got to Matata. No-one got lost but one early bird got to Matata before the clues were put outside for pick-up.
After a sausage sizzle, 16 of us set out for a bush walk near Lake Rotoma. It was a pleasant walk along a 4WD track, with huge deep ruts, which had formed during the recent heavy rain. The circular walk took us to an old mill site amongst the Rotoma Forest.
After a communal BBQ, everyone settled in the clubhouse for some games such as Sjoelen, darts and a new card game called Saboteur, brought along by a new member of the group. Several of us had a go at this interesting game.
Next morning turned out drizzly but after a cooked breakfast, the rain didn't deter one couple from heading off to the Thornton River mouth to catch a fish. Unfortunately, the fish won that round! Other members went for a bush walk at the club grounds, while others sat around chatting until it was time to leave.
I would like to thank the BOP Sun Club for hosting the BOP Naturists for this weekend at their lovely grounds.
Posted by Glenne at 5:08 PM