The whole purpose of our recent trip to Europe was to take up my prize of two weeks accommodation on the Spanish Mediterranean , which I won in the Naturist Action Group’s photo competition last year. This island should not be confused with Fuerteventura, which is a Spanish island in the Canary Islands group in the . As we were travelling so far, we decided to take a long holiday around Europe and visit some naturist venues in and along the way. Here is a brief rundown on our take on those sites, remembering that we were there towards the end of the European ‘summer season’ so there were not the crowds that can be expected in the peak season. It was actually the best time to go, as long as you don’t mind some shops and restaurants being closed in the resorts. After the end of September, many resorts close down completely. 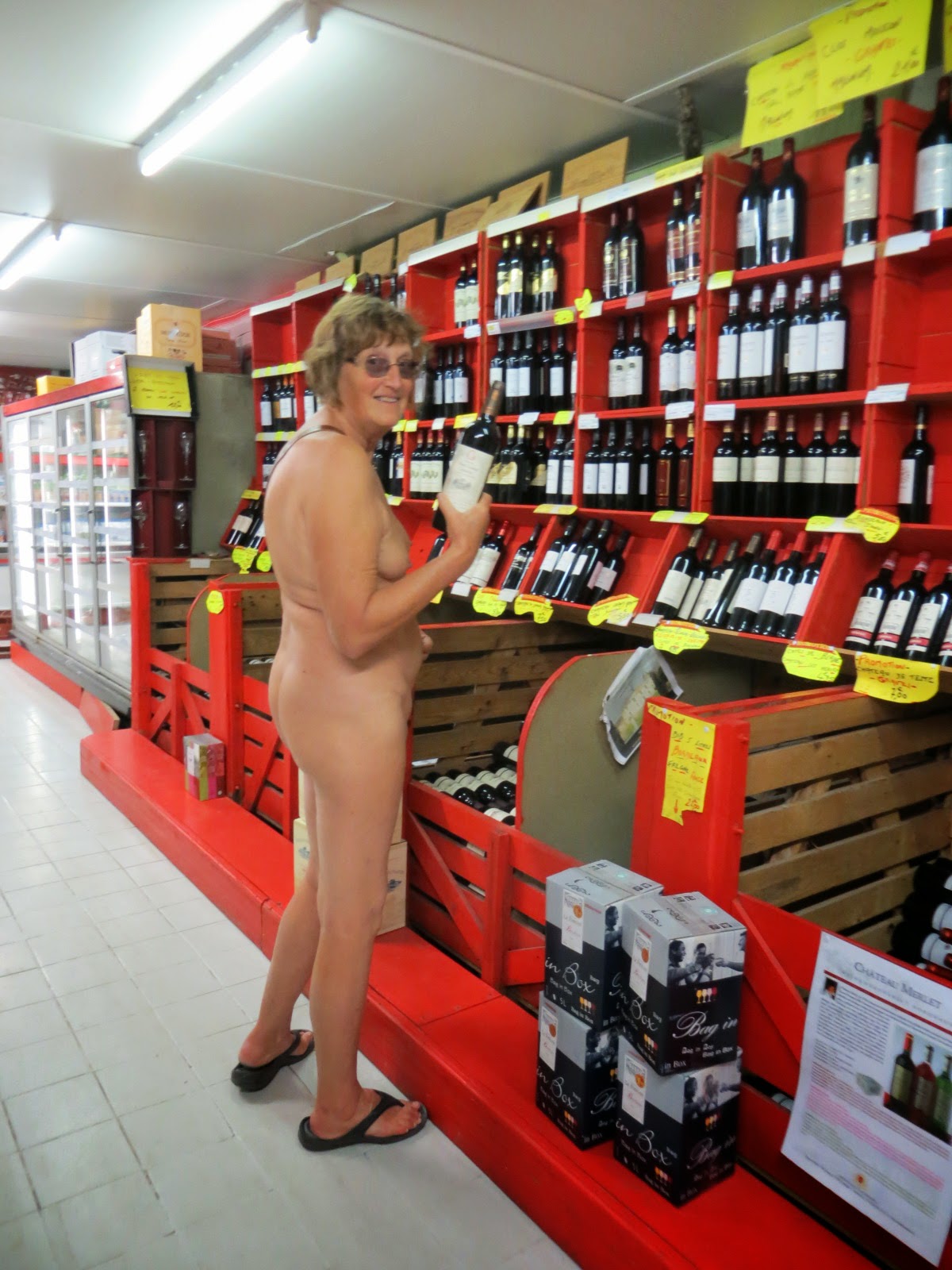 Montalivet: On the Atlantic Coast of France, on the Medoc peninsula near (wine country). This is a huge resort with over 3000 campsites and a 2km beach front. The business centre has a selection of shops so you don’t have to leave the site to go shopping, which can be done naked. There are restaurants, small supermarkets, a bakery, a butcher, delicatessen, a bank, laundry (to wash the clothes you arrived in which we did) and other shops – almost anything could be bought on site.
Here we met up with fellow BOP Naturists from Tauranga, who were also on their way to ndertake the El Camino de Santiago. The grounds at Montalivet were so large, that after a coffee (yes coffee!) at our friends' campervan one night, we got lost in the dark going home when we took a wrong turn and couldn’t find our bearings. Luckily a couple came along and pointed out the direction of the beach so we then knew where we were. For a moment there I thought we would be sleeping under a tree!
There are various accommodations on the site. We chose a Tithome – a Portacom with 2 bedrooms which were lockable and a canvas front with a fully equipped kitchen and dining area, the sides of which could be pulled back to make a bigger covered outdoor space. We also had an outdoor deck. They have more basic and much flasher cabins as well but our little Tithome served us well. 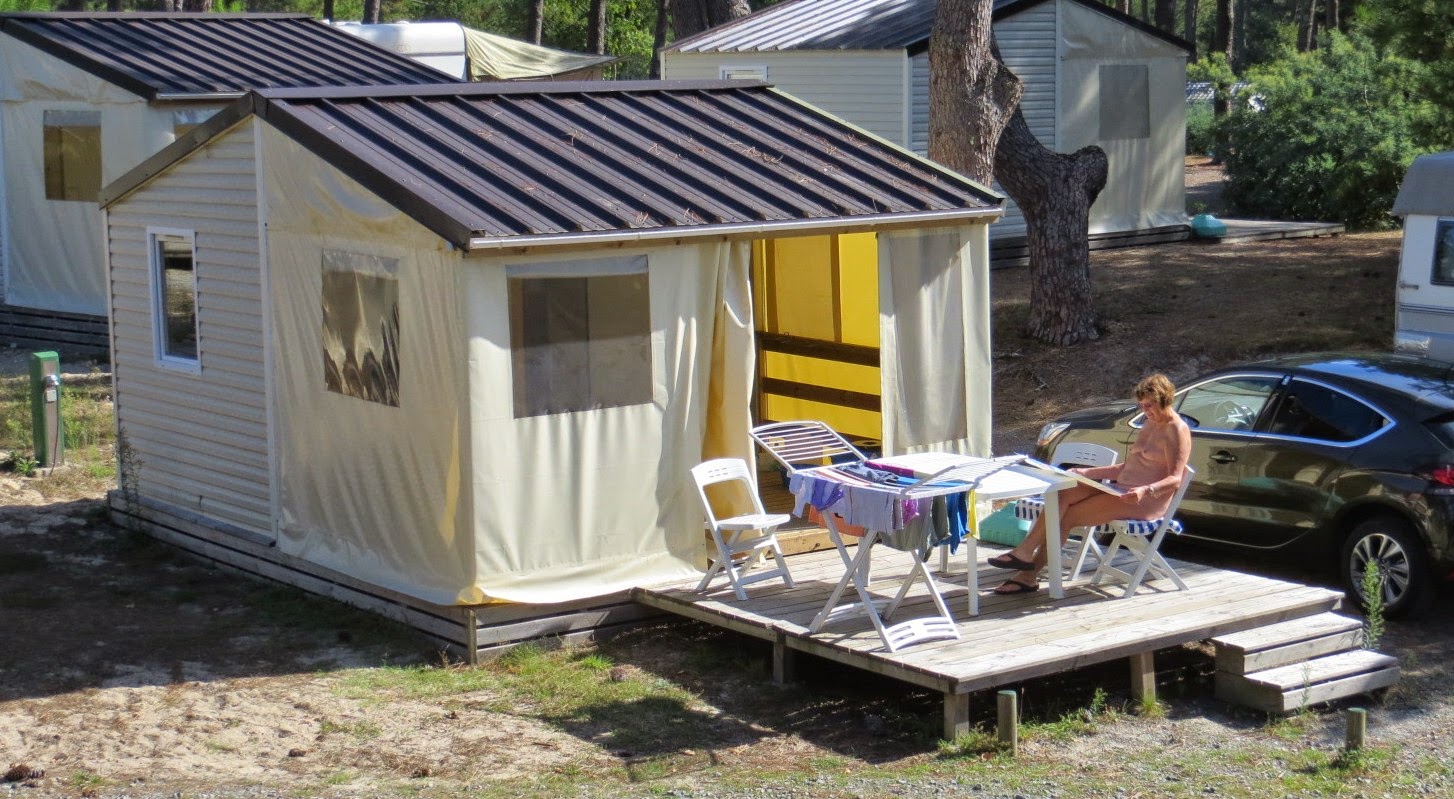 One beach access (there were two) was close to our accommodation. The long sandy beach, which is patrolled during the peak season, stretched out in both directions. The outdoor heated pool had a huge water slide, fountain and Jacuzzi. All in all a great experience and we would recommend it as a naturist venue to visit.


Vera Playa: This naturist beach at Vera in the south-east of has 2000 privately owned apartments in gated communities, which gives a high degree of security. The streets outside the communities are open to the public with no fences or gates to go through to enter the naturist zone. The beach is a public naturist beach and you can go naked on the streets between the apartments and beach. 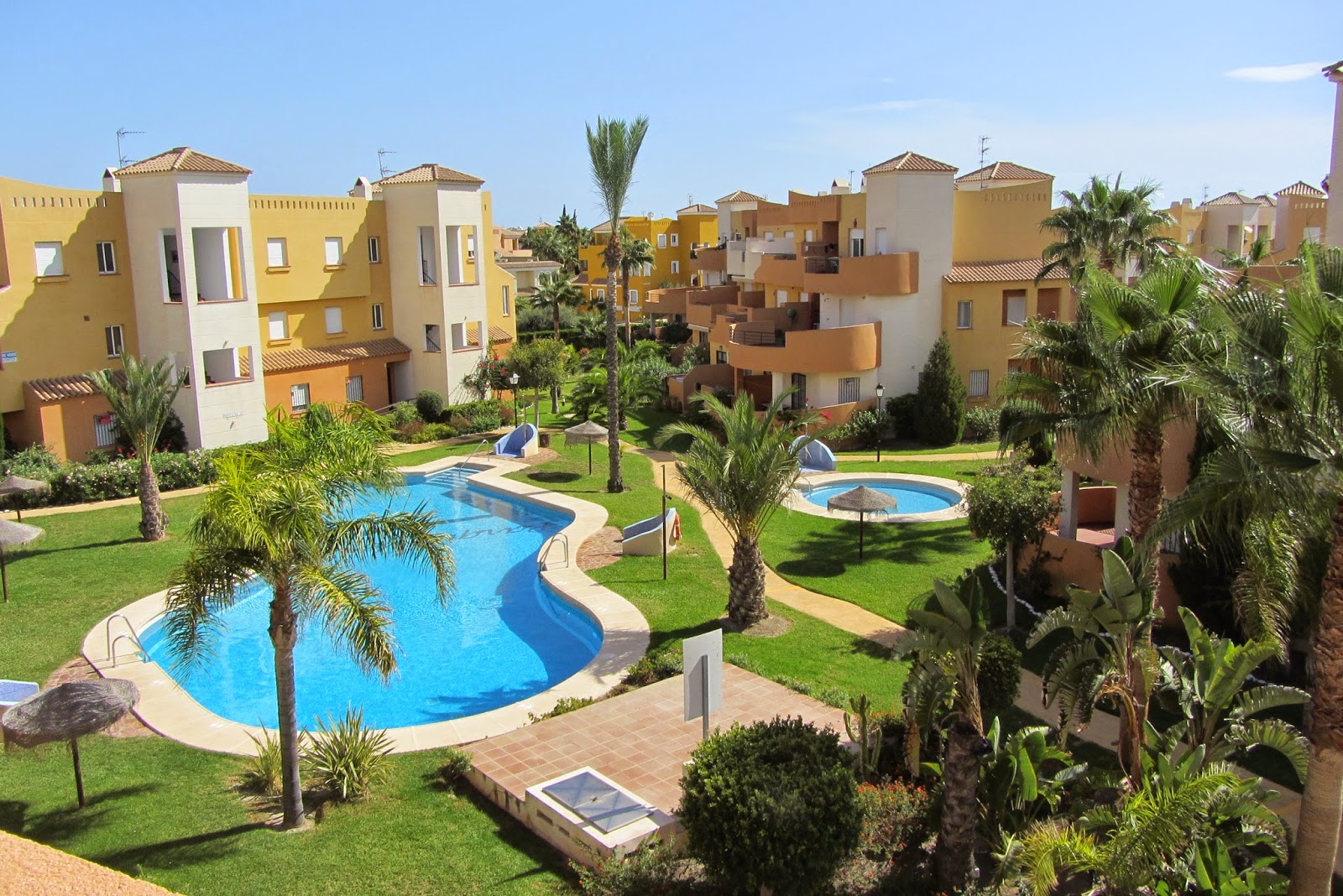 The apartments are all well equipped and in very good order and each block has its own swimming pool.
Inside the naturist area there is a hotel (need to be dressed after 8pm) and a few small shops and restaurants, but outside the naturist area (shown by a sign, not a gate) there is a large textile supermarket so clothes are needed to shop there.
The public streets not as tidy as inside the resorts so you would want to wear something on your feet if walking to the beach. We would definitely go back to Vera Playa and recommend it as a great resort-style naturist holiday.

El Portus:  This was another naturist resort in Southern Spain near , an interesting old walled town with a huge Roman amphitheatre in good condition and archeological excavations that are still ongoing. It is a port and cruise ships were in port when we were there. 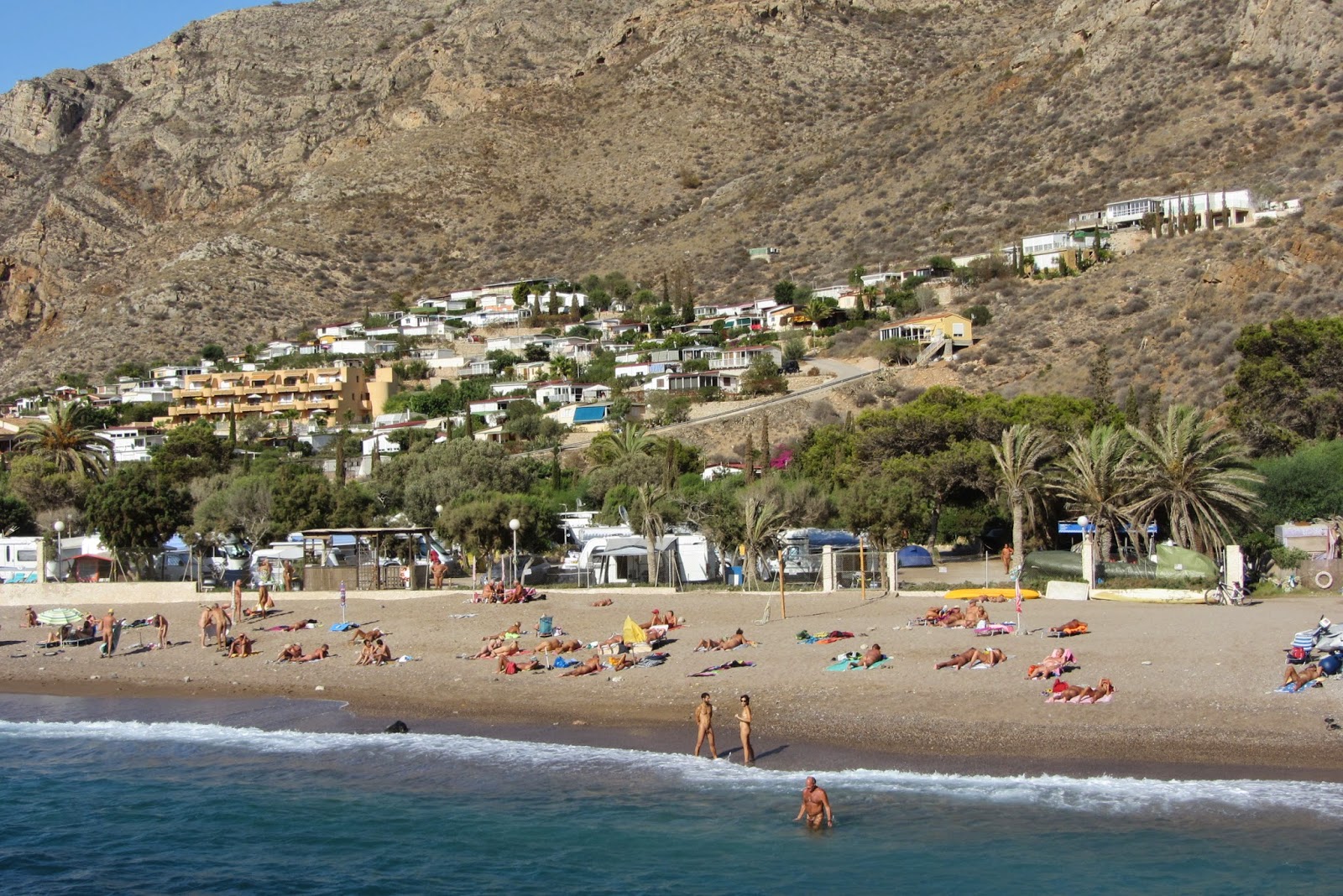 The resort is 12 km from on the coast in a sheltered cove. The accommodation and baches creep up quite a steep hill above the beach. There is upmarket accommodation up the hill (the Hacienda) but you pay extra for the view! The camping area is at beach level where we had a self-contained cabin. The area was very dry and dusty with hardly a blade of grass. But it was close to a large ‘summer’ swimming pool and the beach.
This pool was about to be closed for the winter even though it was about 30oC during the day (but the crowds had left). During the off-season, the outdoor ‘winter pool’ up the hill is enclosed with a concertina roof and walls, which converts it to indoor. The beach consisted of small pebbles and sloped down quickly so was really only good for those who were confident in the water (which was quite warm according to ). There were two restaurants (one had already closed for the season) but the second one up the hill commanded great views over the rocky coastline.
As a naturist camping spot, we would recommend El Portus as a good place to stay, especially with the beach and restaurants on-site. It was only 6 km to the small , where there are restaurants and a large supermarket.

Sierra Natura: This quirky naturist resort was situated up in the hills behind . On their web page it looked like Hobbiton and it sure was. All the buildings were in freestyle adobe construction. 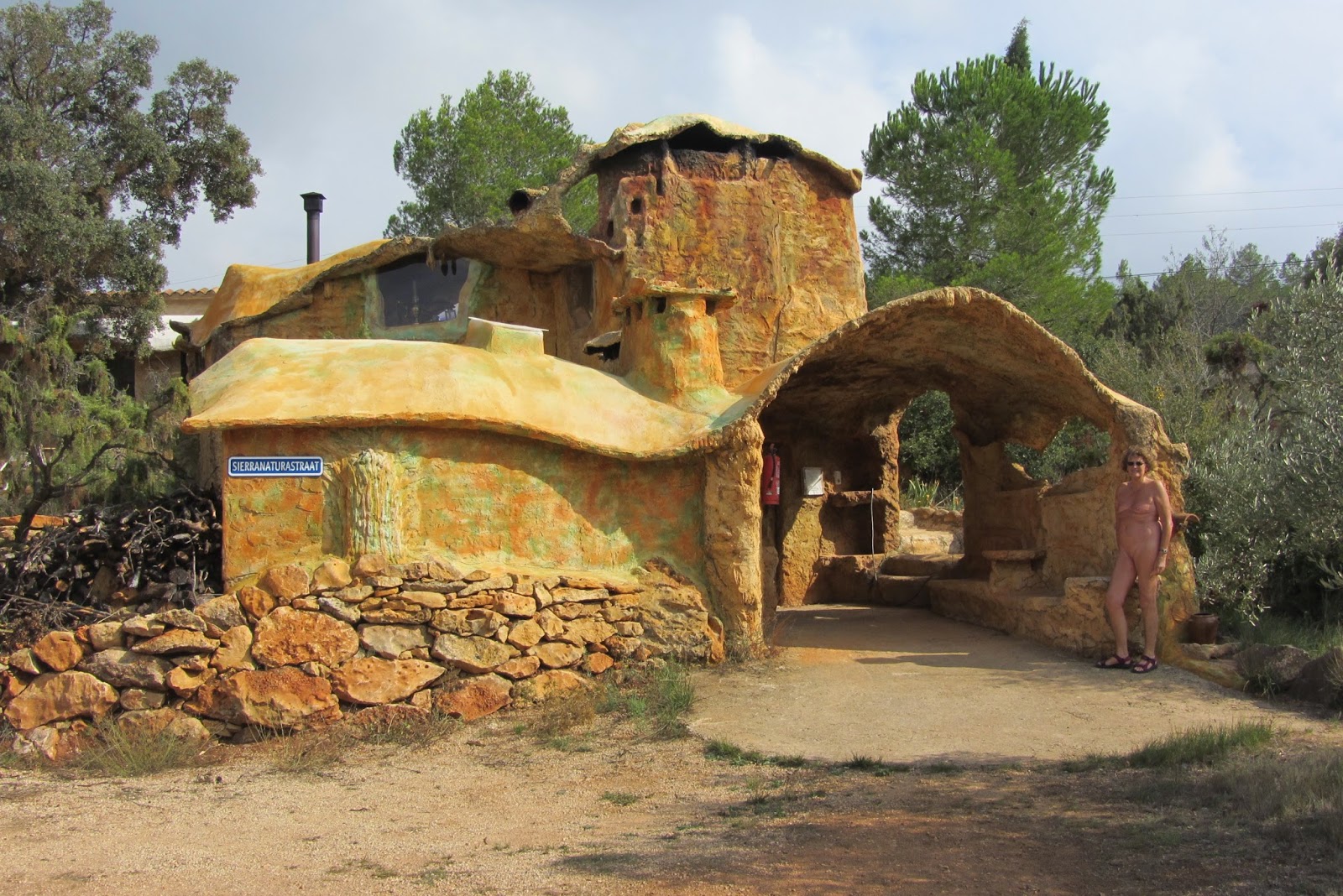 As the area was quite elevated, it was cool which would probably be quite nice during the summer heat. The communal area was well equipped with a pizza oven, full kitchen, dining area and TV. WiFi was also available in the communal area. There is a large swimming pool, an indoor spa and sauna on-site, as well as a restaurant. However, we cooked in our cosy unit. There are several well marked bush walks of varying length around the property and the residents grow their own vegetables. This naturist resort is worth a visit even if just for its quirky architecture. 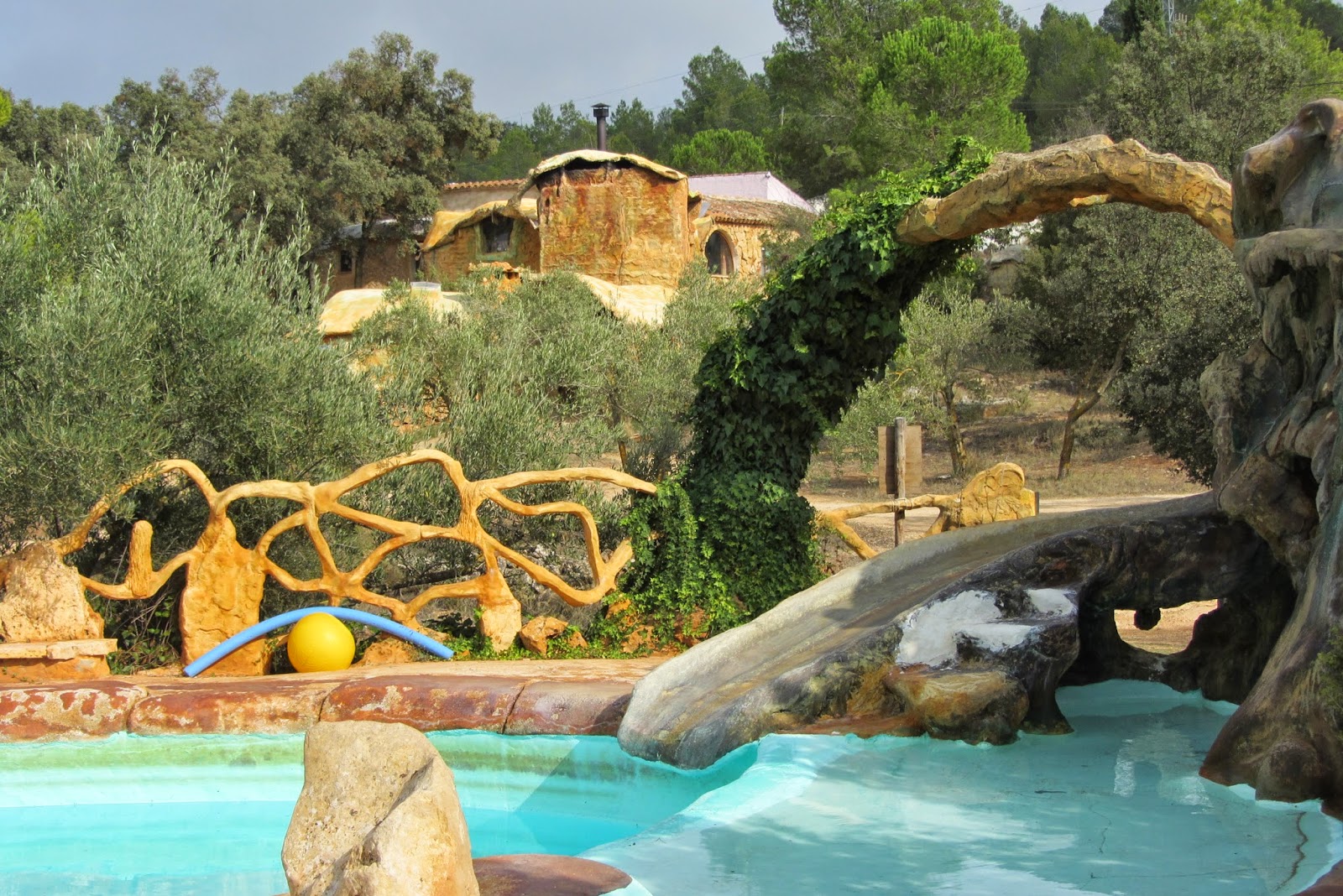 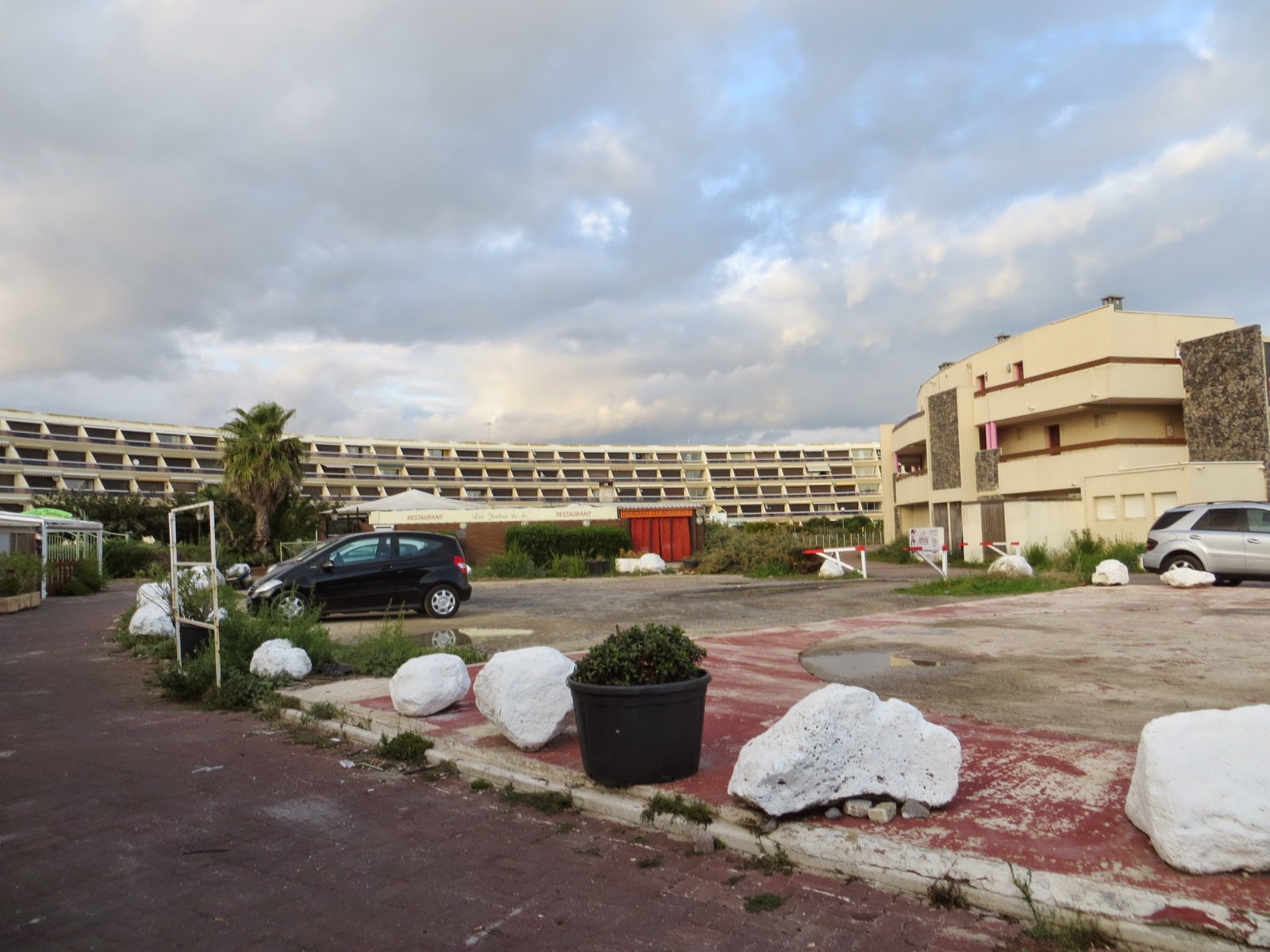 Cap d’Agde: We had heard a lot about this place – some good, some bad. So it was a good time to find out for ourselves! Being a purist when it comes to naturism, I didn't like Cap d’Agde. We'd gone with an open mind and even with most of the sexy lingerie shops and nightclubs for the swingers etc, being closed, we got the idea. The buildings looked very tired and in need of a lot of updating and renovation. The roads were full of pot holes and the gardens unkempt. However the beach was great which was the only good thing about Cap d’Agde as far as we were concerned. It just didn’t do it for us. 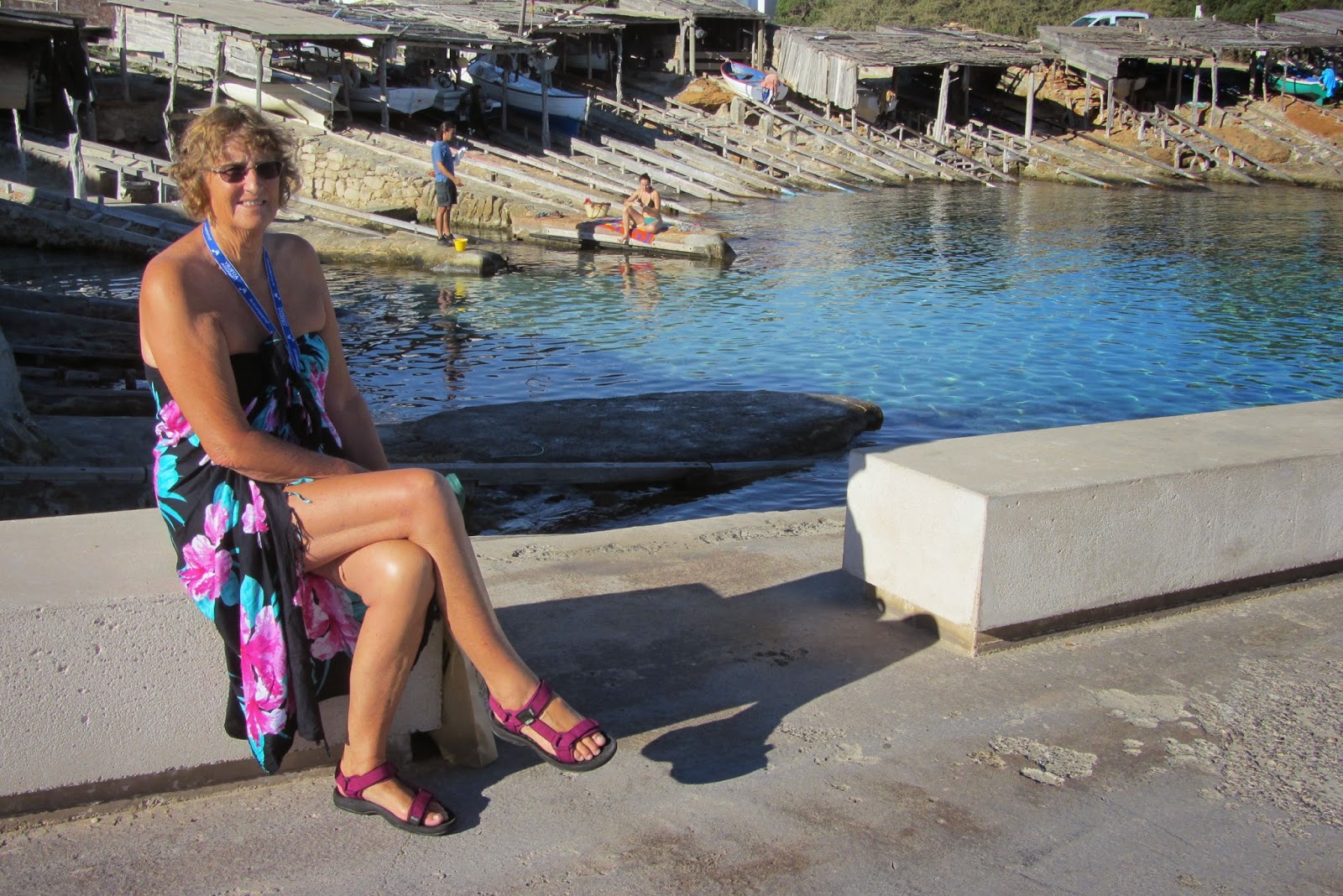 Formentera: Formentera is a very small, laid back island in the Mediterranean, 30 minutes by fast ferry south of . The island is 20 km long with a land area of 83 km2 and around 10,000 permanent residents. There are no high rises on Formentera and no camping is allowed. The Spanish have such a relaxed and liberal attitude to nudity on the beach and on Formentera they are even more relaxed than on the mainland. Hence all the beaches here are clothes optional. However, during the peak summer season (June-September), the beaches become more textile, crowded and overrun with Italians in designer swimsuits. So if you were thinking of going to Formentera for a naturist experience, we would suggest the end of September/early October as the best time to go. Although some restaurants were closing down, there were still plenty open when we left mid-October. The island is dry and rocky with small sandy areas interspersed with rocky outcrops. Some beaches have rocky reefs, but once over these, the water is deep, very clear, warm and the bluest colour we have ever seen.
For the first week, we stayed in Es Calo, a small fishing village on the north side of the island, and for the second week at on the south side. Depending on the wind direction, we would choose the more sheltered side. Both our accommodations were first class for us “all we need is a bed” travellers.
Most days, we would wander down to the beach in a sarong (or shorts if cycling), find a spot amongst the textiles and strip off. No problem, no sniggering and no-one took a scrap of notice. We could totally relax and not be worried that some prude was going to come along and call the cops. There were couples, families, individual males and females and children all enjoying a day at the beach and whether you had togs on or not didn’t matter. Isn’t that a sensible and enlightening attitude?
We hired bikes and cycled the whole length of the island several times. On the northernmost tip, the peninsula was only about 100m across. This area, Ses Illetes/Llevant is advertised as an area where naturists gather, but we found that all beaches on the island (except maybe Es Pujols) were naturist friendly, with textiles and naturists mingling together and totally accepted. Es Pujols is apparently Formentera’s ‘party’ town with quite a few shops, restaurants, bars and apartments together with a few nightclubs. Here we didn’t see any naturists on the beach, although some women were topless.
The island is perfect for cycling (or mopeds) having only one hill, 150m high. We walked/cycled up the hill and got great views down the length of the island. At the end of the road, a few km from the town of , there is a lighthouse at the most eastern point of the island, high above the sea. 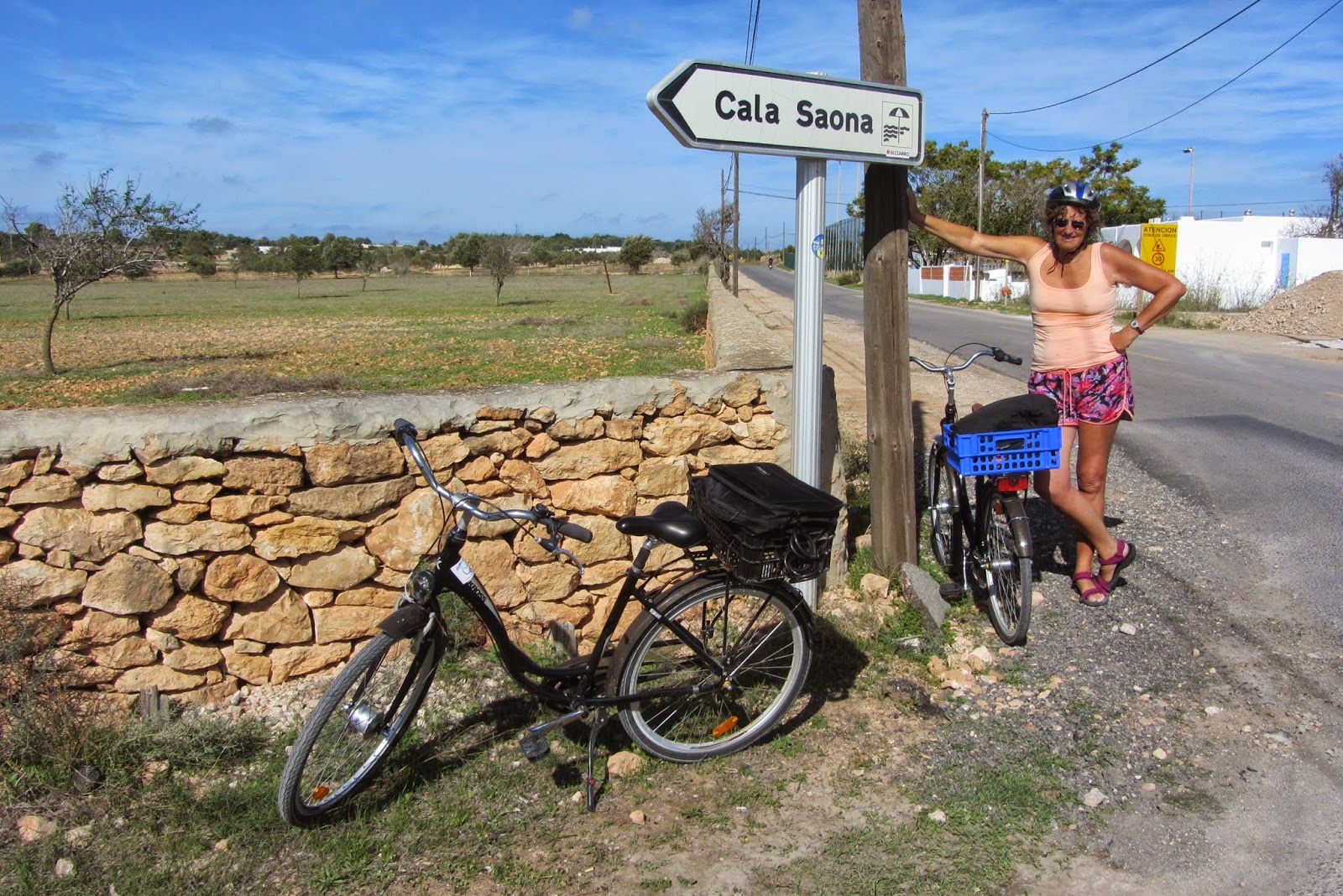 The western side of the island only had one beach, a small cove called Cala Saona, which was a haven along the rocky coastline. To get there we had to cycle through the capital, where there are shops, markets and restaurants. The island is criss-crossed with unsealed ‘green ways’ – mostly car-less dusty tracks with quite a few potholes! Cycling along here we could see how the locals really live with small farms running scruffy sheep and goats – the paddocks separated by stone walls – and also growing crops such as figs, grapes and vegetables.
To us the island was just paradise. Although we had to be dressed away from the beach, most of the time we just wore a sarong, except if we went for dinner at a restaurant. The weather was great – high 20s every day and down to low 20s overnight. The sun seemed less harsh than in NZ so we could be on the beach all day without getting burnt and developed a great all over tan! 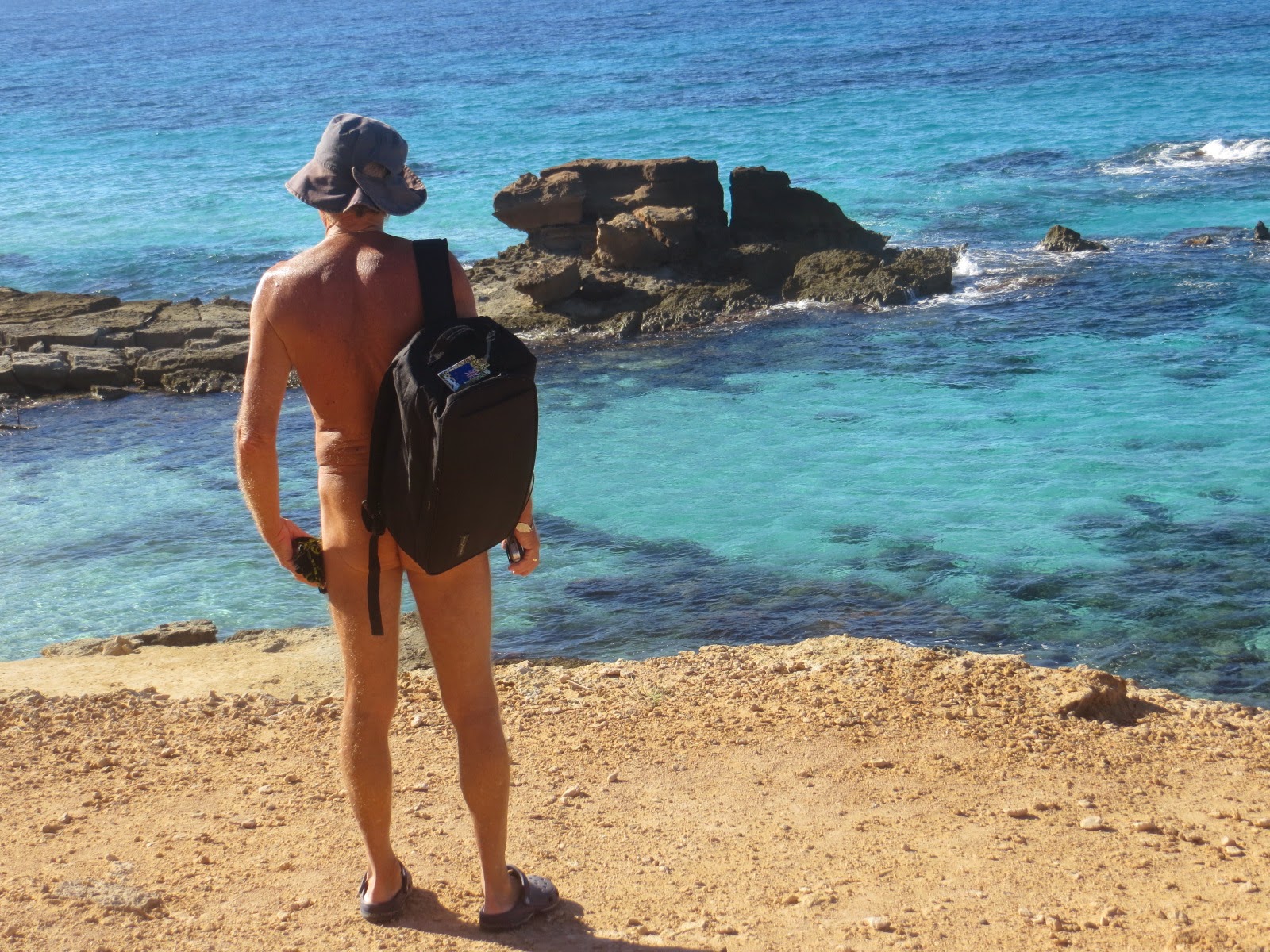 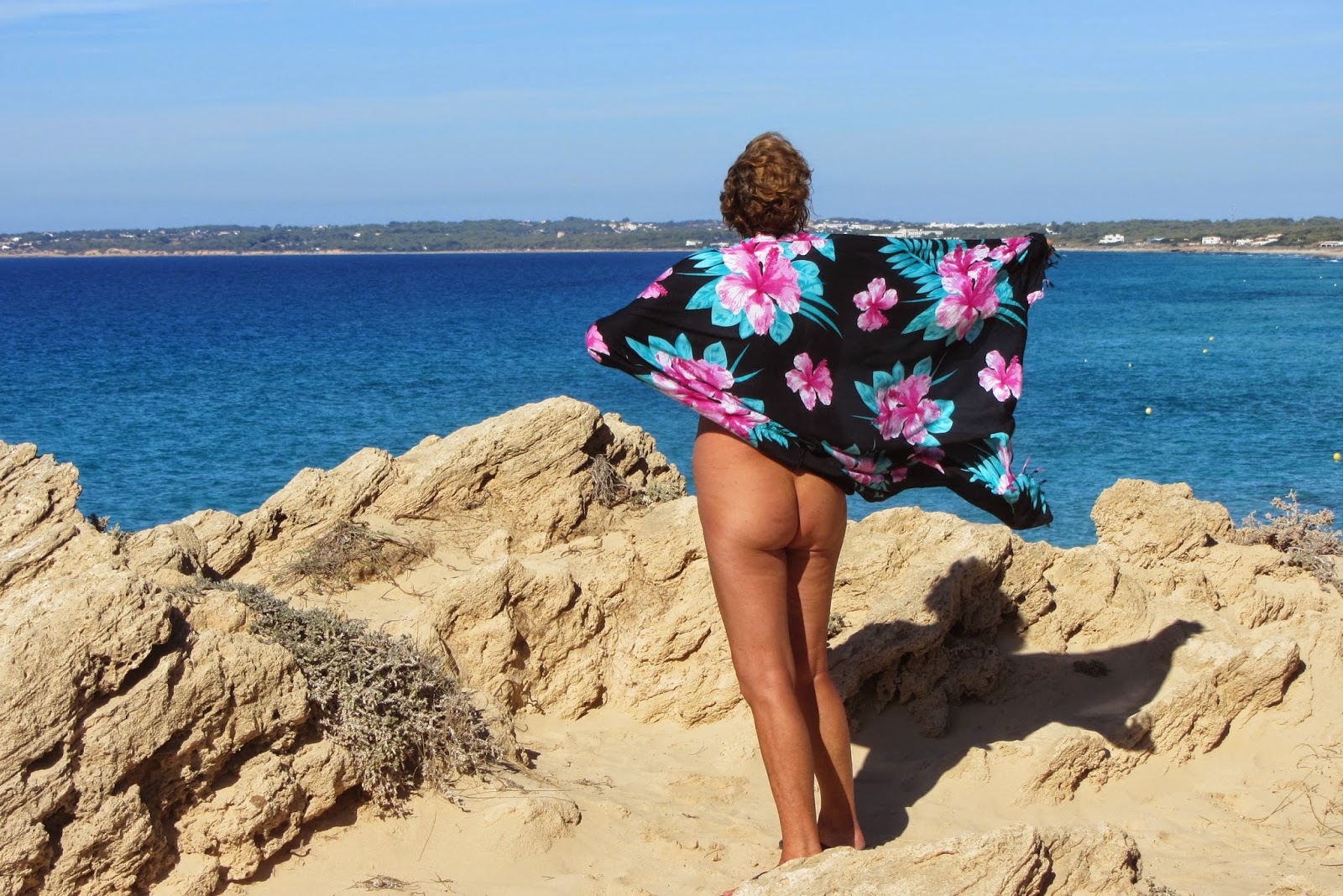 If you are interested in reading more about our experiences on Formentera or the other naturist resorts we visited, take a look at my travel blog:
www.glennesblog.blogspot.co.nz. Just remember that the first post is the most recent.
Posted by Glenne at 2:39 PM