WOW! What a great weekend we had at Opoutere Beach. We even managed to get the weather Gods to participate, with a fine weekend wedged between a cyclone and heavy rain. 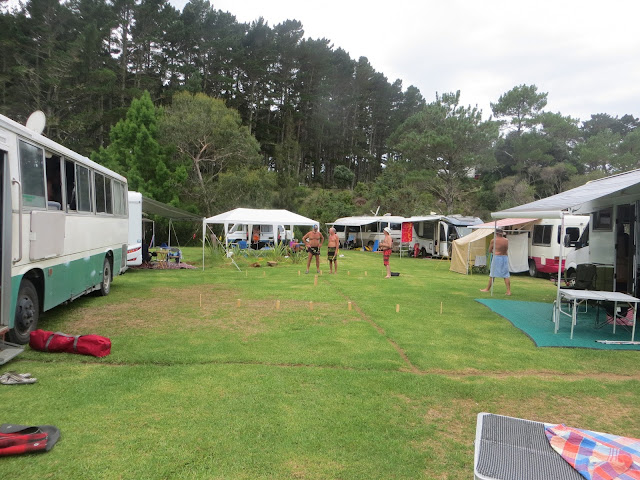 We had a total of 8 large motorhomes, 4 small campervans squeezed into our limited area which would normally only hold only 8 sites and as well we had 3 caravans in another area. With careful parking of the vans in a corral circle, we even had room for our gazebo and to set up the Kubb.
With the weather being extremely hot, everyone went to the beach. The water was very warm and we were able to use our boogie boards to surf right in to the sand. Didn't do the elbows much good though! Others just swam while others sunned themselves. A couple of kites were produced, flying with varying degrees of success in the warm breeze. All this was au naturel, as Opoutere Beach is a recognised free beach.

Some tried their hand at fishing (naked too). Fish landed were a trevally and kahawai. One person even got a legal-sized snapper. There were tales of a possible stingray as well, which took the line of one unlucky fisher person. A few walked to the end of the beach, some 5km each way.
Happy hour both nights saw everybody joining in to socialise and and tell fishy tales, and tales of sun, sea and surf. A shared pot luck dinner followed and everyone sat around until dark. Some still had a challenge in the Kubb to finish off. I have never seen Kubb played under torch light before!
The only negative about the whole weekend was that we had to be dressed in the textile camping area! What a fun time we all had. Shall we do it again next year - SURE WILL.
Posted by Glenne at 1:25 PM