PICNIC AND PARKOVER IN TAURANGA

We had another great event at a private property in Pyes Pa, Tauranga last week. There were over 40 people at the event, with 16 campervans/tents staying for the weekend. 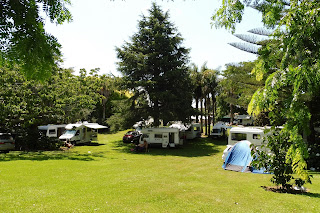 The weather was hot, hot, hot except for spells on the Sunday morning when the sun disappeared, so the shade offered by the huge trees on the property was most welcome.
After dinner on Friday night we sat around the fire even though it was still quite warm. But there is nothing like a fire to encourage a friendly atmosphere. With guests from all over the North Island (as far south as Wellington) and one from Blenheim in the South Island, there were plenty of new friendships to be made. 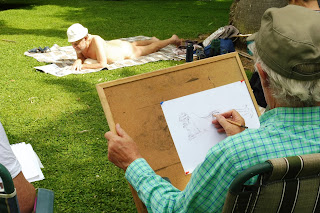 On Saturday, we welcomed a group of life art artists and a few of our own, who sketched some of our great models. It was great to see people lining up to be drawn. The art group are always looking for models so were very pleased that we could help out. 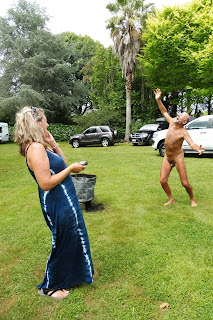 While that was going on, we were ‘entertained’ by another artist, Julia, who was needing groups of naked people to be photographed for her creation based on the poem Dante’s Inferno, which details Dante's journey through the nine circles of Hell. Most of the people he meets in Hell are naked for some reason!
Our models had to act out various scenes such as being a petrified tree, tormented by hell, a harpie (a ravenous, filthy monster having a woman's head and a bird's body), a group line-up, a flesh eating monster and many other poses which will form the basis of Julia’s artwork. 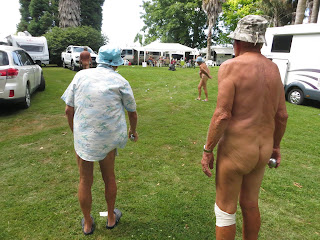 During the afternoon, we played Kubb or petanque or enjoyed relaxing and socialising until happy hour. Mark brought out some bubble-making equipment which we had fun playing with. 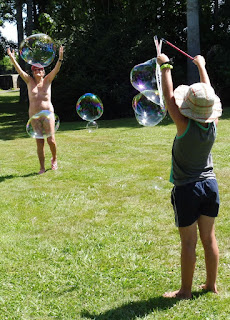 When Julia left, she generously left us with a box of beer and four bottles of wine as a thank you, to share among ourselves. As we had no room in our frig, I suggested that everyone take a few bottles to put in their frigs to chill it for happy hour. When happy hour came, the beer and wine came out to the gazebo already chilled for everyone to share. 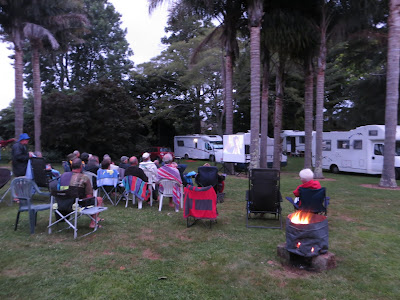 Marie made six members relaxed and happy with one of her massages – well done Marie to do six on the trot during the afternoon!
A BYO shared BBQ followed happy hour and then we all sat around the fire until it was dark. Unfortunately, the temperature dropped, and it was clothes-on (lots of them) while we watched the movie, ‘The Woman in Gold’. It was a good story but spoilt due to not being able to read some of the sub-titles translating the German.
Just as the movie finished, it started to drizzle. We just had time to get the film gear packed away before it set in overnight.
Next morning, Col, our naked chef, cooked a breakfast of hash browns, baked beans, bacon and eggs for everyone. After morning tea, some of the group packed up and left, but the rest of us stayed for the afternoon as the weather had cleared. It was sad to pack up on another great outing for the group.