A group of up to 16 motorhomes took part in our recent naturist camping safari to the tip of the North Island of New Zealand. The weather for the whole safari was perfect, with only a couple of showery afternoons during the whole month. All weekend activities were designed to be at naturist venues.
The first weekend was at Opoutere Beach, a recognised naturist beach on the Coromandel Peninsula. The members going on the safari were joined by several other campers, who could only stay for the one weekend - a total of 30 camping for the weekend. 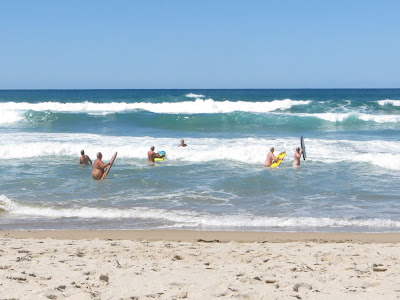 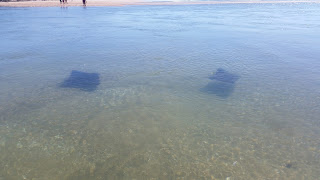 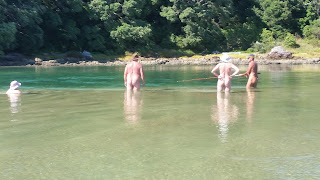 We swam, fished (some caught some small kahawai), walked along the beach and enjoyed a beautiful hot sunny weekend at this idyllic spot. Some members were even seen naked in water up to their bums in the estuary spotting stingrays.


We had the usual happy hour and shared a communal meal on the Saturday night.
On Monday, we left Opoutere and spent a night at Ray's Rest, a popular free camping spot on the Firth of Thames, which is a well known wading-bird area.
Then it was the trip through Auckland - something nobody enjoys due to the heavy traffic, but we all negotiated it without incident and found our campsite for the next few nights at Wenderholm Regional Park, just north of Orewa. Here some of us cycled around the park while others climbed up and over a steep bluff with great views over the Puhoi River. 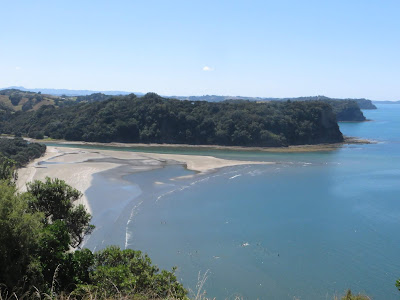 On the way to our next stop at Port Albert on the Kaipara Harbour, a visit to the historic Puhoi Pub, museum and cheese factory was an interesting side trip. At Port Albert, some of the group tried fishing off the old wharf with limited success (although one member did catch a small shark) while others bought fish and chips for dinner from the local shop at the top of the hill and got wet for their efforts as a heavy shower passed over just as happy hour ended. 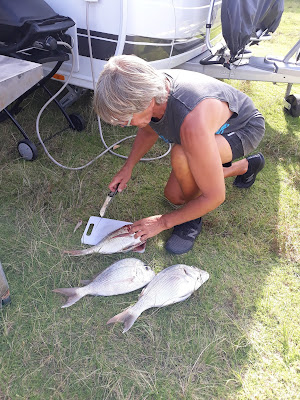 Already one week had passed so it was another naturist venue for the weekend - Uretiti Beach DOC (Department of Conservation) campsite. This is adjacent to a recognised naturist beach - textiles to the left, naturists to the right! At this campsite, we were joined by a small contingent of Northland Naturists and up to 30 of us gathered for happy hour over the weekend.
One local member put out his long line and caught 3 good sized snapper which he cooked on the BBQ for everyone to sample - yum! We played Kubb and petanque on the beach which was a different experience as the balls and sticks wouldn't bounce on the soft sand! 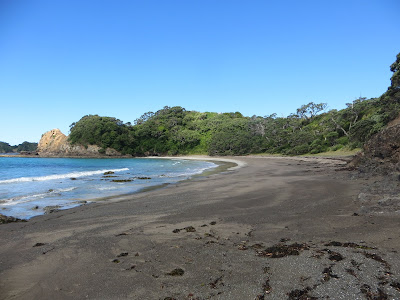 Heading further north to Otamure Bay at Whananaki North, we stayed in the DOC camp. A 5-minute stepped walk up and over a bluff led to the secluded Tauwhara Bay. What a gem! Several of us enjoyed the peaceful scenic little bay and some had a swim.

Although some tried to catch a fish for dinner, none took the bait. Some of us also walked along the longest footbridge in the Southern Hemisphere to the other side of the estuary at Whananaki South. 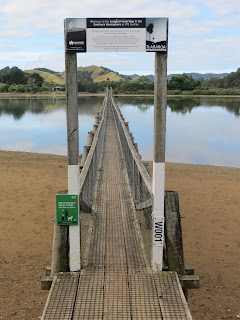 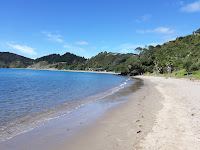 Then on to historic Russell in the Bay of Islands. We stayed in the Russell Top 10 camp ground - a bit of luxury here, like electricity and washing machines! While some caught up with their laundry, others went sightseeing on the beautiful Bay of Islands, others walked down the hill to the covenant-protected naturist beach at Waitata (Donkey) Bay. We spent a peaceful day at this small secluded bay lapping up the sun and swimming in the calm, warm water. 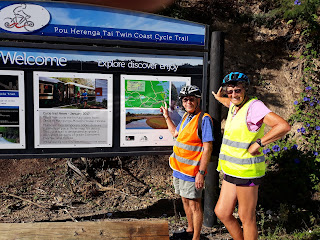 The next day, seven of us cycled part of the coast to coast cycleway from Opua to Kawakawa and back - about 25 km in total. 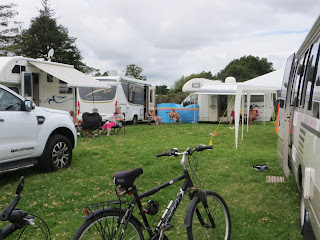 Our next weekend was to include a naturist boat trip to some secluded bays in the Bay of Islands, but unfortunately, our skipper wasn't well so we couldn't go. Although a disappointment, our hosts were great and allowed us to camp in a secluded paddock on their farm where we based ourselves for three nights. This gave us ample time to go sightseeing and cycle around the Kerikeri region. Others tested their skill at Kubb and petanque on a different surface - long, springy kikuya grass! This was challenging, especially after the sand at Uretiti. 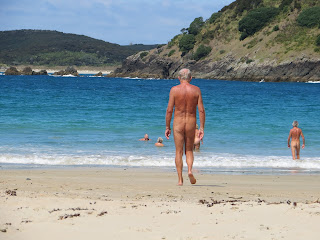 The next stop was at the DOC camp at Maitai Bay on the Karikari Peninsula. Here there were two beaches separated by a small headland. As there were few people around at this time of the year, we almost had both beaches to ourselves, and some of the more adventurous walked to the far end of each bay. The water was inviting and calm so several of us went for a swim here as well. 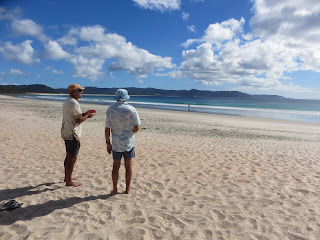 Then to the destination for this trip - the northernmost camp site of the North Island of New Zealand - Spirits Bay. What an amazing place this was. A long curved bay stretched out before us with pink sand made up of small shell fragments. At the end where the DOC camp was, there were a couple of sheltered coves where some of us spent the day, swimming and trying for those elusive fish. A neighbour took pity on us and gave us a large kahawai which we cooked on the BBQ and shared for happy hour. I got a bee sting on my foot, which curtailed my walks along the beach a little, but others walked to the next bay, far away in the distance, while others explore the small historic cemetery and cannon mounted high on a hill nearby. Before visiting Spirits Bay, some of the group visited Cape Reinga lighthouse, which we could just see in the distance from Spirits Bay. 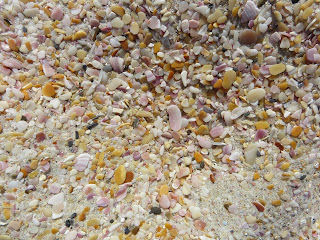 It was finally time to head south again. An overnight stop at Rarawa DOC camp where one member tried to catch a fish with toast, while others walked to the beach to try their luck, which wasn't successful unfortunately. 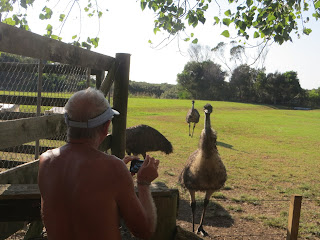 Another highlight of the trip was the weekend visit to a naturist homestay and emu farm at Waiharara with great hosts. Some cycled to the beach, some played petanque, some swam in the estuary. We learnt about motorbikes, emus, emu oil and met the tame emu, Carol. A small craft stall run by he hosts' daughter allowed us to purchase several home made craft items and some exclusive emu oil.
This visit was topped off with a communal happy hour and meal, with the meat being cooked on a parilla over hot coals. 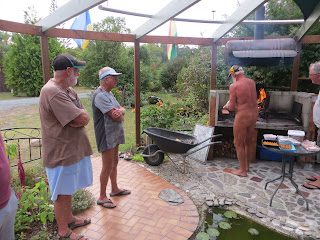 Reluctantly it was time to leave here and head to Kaikohe, where we visited the nearby coloured, healing Ngawha natural springs. The pools ranged from cool to super hot! Most of us chose the  42 degree C pool, with black particles in the water. 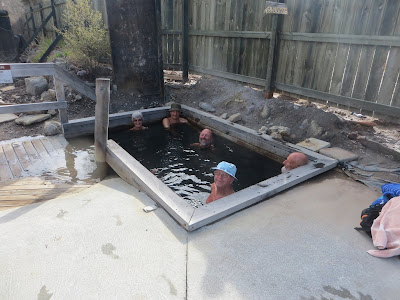 Our final night together was at the lovely Kai Iwi Lakes on the west coast. On the way here, we passed through some historic towns and amazing scenery. Two couples visited the Wairere Boulders and completed a walk to these unusual geological formations.
We stopped off to see the largest kauri tree in NZ, Tane Mahuta in the Waipoua Forest, which is threatened with kauri die-back disease. We could see many remnants of dead kauri in the forest and just hope that the quarantine measures in place before entry to this magnificent tree will save it and others from this devastating disease. 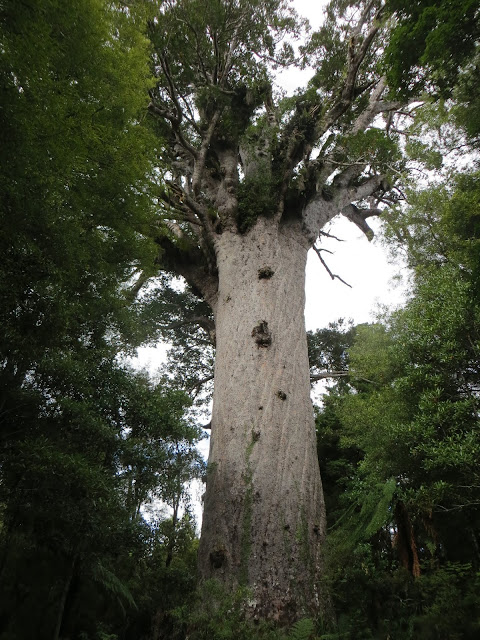 So ended a fantastic month-long safari up one coast and back down the other of New Zealand's far north. The tour was very successful and everyone certainly enjoyed it. We all made new friendships and everyone will, I am sure, remember this experience for many years to come.