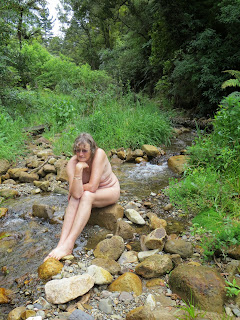 Although not a Bay of Plenty Naturists event, members were invited to the Bay of Plenty Sun Club to join in with their Labour Weekend festivities. The weather was great when the sun was out, but the air was very cool when it disappeared behind a cloud. Still it didn’t stop many of us getting the start of a tan (some a little red tan!) and feeling the freedom of no clothes after the long winter.
On the Saturday night, we had a pot luck dinner followed by a beer tasting competition. With 13 different unlabelled beers to taste and identify, the results showed that we really don’t know a lot about beer! The winner got 2 right and I got 1½ right (the half for saying stout instead of Guinness)! The beer tasting, was followed by drinking the products (well we couldn’t waste it eh?) and then a few fun games. 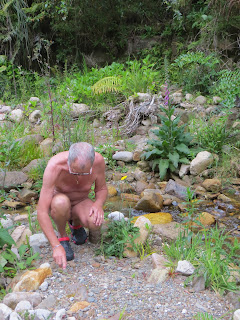 On Sunday, we lazed around in the sun then and I went for a bush walk taking some photos in the bush and around the creek.
That night we had a shared BBQ after happy hour then honed our quiz skills in preparation for the quiz night as part of the Phoenix Shield against Waikato Outdoor Society in a few weeks.
Another brilliant day dawned on Monday. and I went for a bike ride to Matata 5km away. It was a relatively easy ride to the beach, but coming back we had a head wind, so this tested our ‘not-used-much’ leg muscles. Still we made it back in time for lunch, before heading back to civilisation mid-afternoon.