Its always difficult to find activities that include naturism over the winter months, but BOP Naturists have been enjoying some fun times nevertheless.


FILM NIGHTS
Over the winter months, we held several film nights. Movies we have watched were 'Changeling', 'The 100 year old man who climbed out the window and disappeared', 'Those Magnificent Men and their Flying Machines' and Stephen King's 'Misery' on Halloween.

CLASSIC FLYERS AND FILM NIGHT
t was very interesting to go through the (world class) Classic Flyers Museum, to see up-close the magnificent machines that fly.
Of particular interest were the Catalina and the Heron, and the many and varied machines that have had a part to play in all of our lives - whether we appreciate this fact or not. The food at the café was pretty good too.

After the museum, we spent a lovely warm afternoon outside in our private backyard with a few drinks, socialising and soaking in the spa. After a light dinner, we watched the movie ‘Those Magnificent Men in their Flying Machines’ which was a real hoot, despite most of us having already seen it many years ago.

FILM NIGHT AND BBQ - AND THE WORLD CUP RUGBY FINAL
Once daylight saving was in force, we had an afternoon spa, followed by a BBQ and movie ('Misery') at our place. It was a great afternoon of relaxation and was made even better by some of the group staying overnight and getting up at 5am to watch the All Blacks win the 2015 Rugby World Cup! This was followed by a champagne breakfast, which helped to celebrate our win. 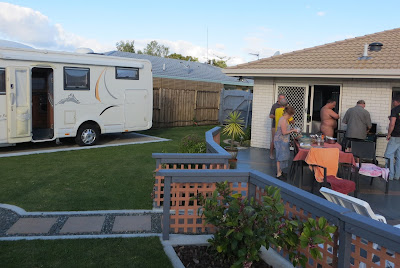