This year was the best ever attendance at this event. Over 50 members enjoyed a fun-filled weekend of socialising, fun activities and plenty of food.
We started out the main activities on Saturday morning with morning tea and then the games began. The forecast was for heavy rain in the afternoon so we put plan B into force and opted for indoor games. Even without the rain it would have been too cold outside although we added mini-golf to the games which could be played between showers
The indoor games played were pool (8 ball), darts, table tennis and Wii ten-pin bowling. This was a game that only a few had played before, but which most people had a go at. 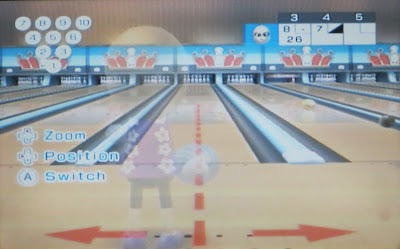 Some even got hooked and tried out the tennis and basketball with mixed success. We played all doubles with the other games, as with up to 20 players wanting to take part, we would have run out of time for singles. The members all helped with the running of the draws, which meant that by happy hour, all the games were completed and everyone knew everyone! Afternoon tea was served while the games were being played.
Happy hour turned into a pot luck dinner with plenty of food for all. After dinner we had a quiz, which certainly tested the knowledge of everyone present.
On Sunday morning, the All Blacks were playing France. As Katikati Naturist Park now has Sky TV hooked up, many people wanted to see the game live on the big screen. So we served a continental breakfast before the game and hot savouries at half time. 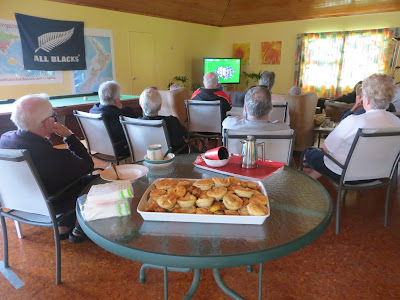 After the game (which in case you didn't know, NZ won) we served a cooked brunch of bacon, eggs, hash browns and baked beans.Then it came to the prize giving - not just for the winners of the games but for everyone for attending. So no-one went home empty-handed.
This rounded off another very successful event for the Bay of Plenty Naturist group and we would like to thank Tom and Ami from KNP for hosting us for this event. We will be back again next November to repeat this annual event.
Posted by Glenne at 2:27 PM