Gosh - Do we have fun at Bay of Plenty Naturist events!

Another great event was enjoyed with our huge Christmas party weekend being held at a member's private property in Pyes Pa, Tauranga.
The weekend started on Friday, with six motorhomes arriving and setting up amongst the beautiful setting of established trees and palms at 'Phoenix Park'.

On Saturday another three motorhomes settled in. Day visitors started arriving and all the group's attendees happily undertook a 'creature hunt', looking for creatures dotted amongst the trees around the camping area. Some members must have wandered around the area at least 10 times, looking for the creatures - at least they had the time to discover the array of plants at this beautiful park-like garden.
Two couples found 24 out of 25 insects and marine creatures. However, one bug eluded everybody and it wasn't until the next day that number 21, a green spider was pointed out as to its location. It was amazing that the searchers had walked past this many times, looking directly at the spot. It just shows that you can look at something but not see it. Mind you, being a green spider amongst green foliage might have helped its camouflage!!
A few, who wanted a break from creature hunting, played petanque while others relaxed in the shade of the gazebo. Apart from a nearby thunderstorm on Friday night, the weather was perfect all weekend.
Happy hour on Saturday afternoon, led into the evening with a shared BBQ, before we sat around the fire waiting for darkness to arrive (it was almost the longest day)!! Once it was dark enough, we watched a movie 'Stranger than Fiction' outdoors. While some found it a little strange, others found it fascinating, just showing that we all have different tastes when it comes to movies (or anything else). What a boring world it would be if we were all the same!! 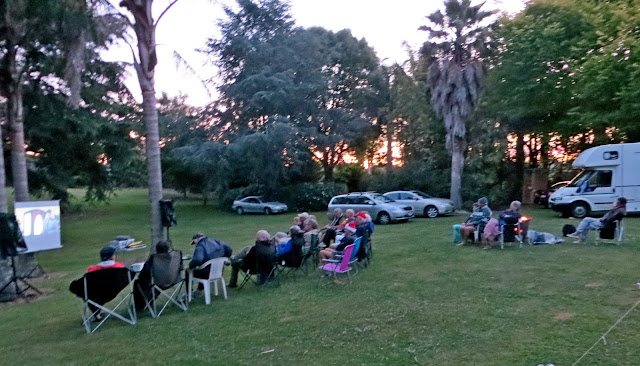 On Sunday, BOP Naturists provided a cooked breakfast and much chatter was heard during the morning as everyone found new friends. Two couples from Australia arrived mid-morning (the weekend was timed to coincide with their visit) and it was great to meet them again (Col and I and several other members had met them in Australia over the years).
Of course we were all waiting for Santa to arrive with his three boxes of gifts for everyone (one for males, one for females and one for either) to take a present from. So everyone went home with a small gift.
Once Santa had disposed of his load, lunch was served. This was also provided by BOP Naturists from funds donated or collected through raffles throughout the year. Lunch consisted of pizzas, salads and buns, which were washed down with some liquid refreshments.
After lunch, we went to 'the races' again and held the 'Trans-Tasman Stakes'. First was the 'Fashion in the Field' competition - ladies a hat, men a tie. The men judged the ladies and the ladies judged the men. The winning combination came from the same Whakatane stable, and went home with two bottles of bubbly for their efforts. 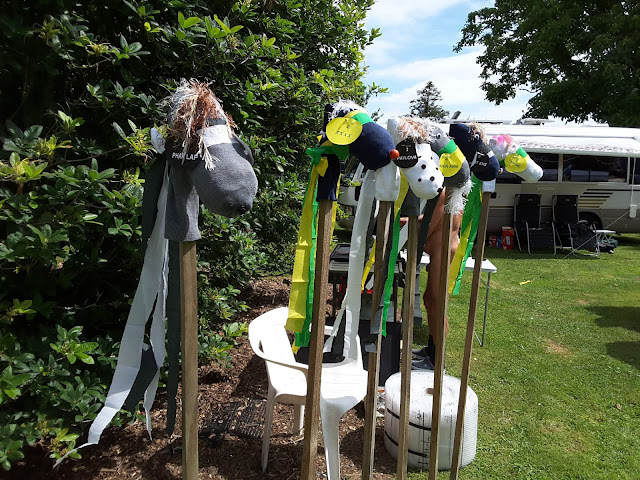 Now back to the 'Trans-Tasman Stakes' - Three horses from NZ (Phar Lap, Split Enz and Pavlova) in black and white colours raced against three horses from Ozzie (XXXX, Thong and Underarm!!) in green and gold. Betting was solid and the result of five races was 3-2 in favour of the Kiwis. 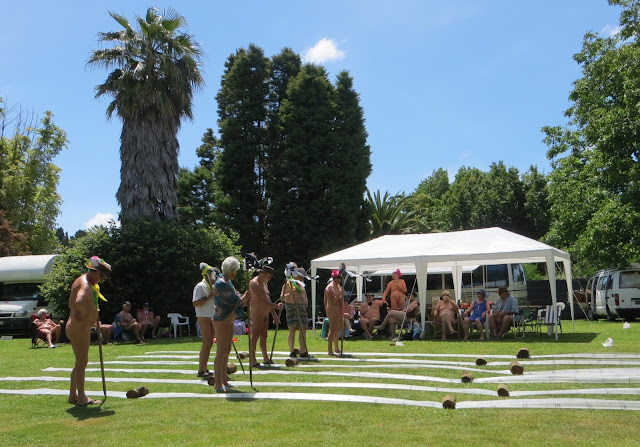 After afternoon tea, we all packed up and went our separate ways. This was an extremely well-attended event on our full calendar from throughout the year. I am sure that everyone had a great time and are already looking forward to the next event, which will be a hot pool evening early in the New Year. After that, we will be returning to Pyes Pa for our annual 'Picnic and Parkover at Pyes Pa' when we have invited a group of local artists to join us for some life drawing amongst the trees at 'Phoenix Park'.
If anyone would like to join in the fun events organised for Bay of Plenty Naturists, contact me on bopnaturists@gmail.com. All correspondence is by email and it is free to join.
Posted by Glenne at 5:16 PM