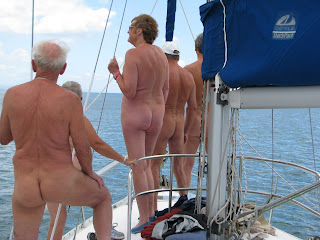 After three previous attempts, the gremlins were finally sent packing and seven hardy BOP Naturists headed out for a two hour sail around the Tauranga Harbour.
It should have been a day-long adverture for 22 naturists to Motiti Island with two boats, but factors beyond our control (a cyclone, an oil spill and one boat being sold), put paid to that.
But the weather Gods were on our side today. It was partly cloudy, and the winds were perfect. Perfect enough to go to Motiti Island if only the oil spill cordon had been lifted according to the skipper. Darn!
With a stiff south-westerly wind blowing, we headed out to Matakana Island and the harbour entrance, then back around the harbour, past the Mount, a cruise ship, a logging ship and a container ship and then back to the shelter of the marina, where we all had our lunch while watching a wedding take place on the foreshore.
We must all thank Phil, our skipper, for being so generous in offering us a free 2 hours on the harbour - his gesture of goodwill seeing as the original trip could not proceed as planned due totally to circumstances beyond his (or our) control.
Posted by Glenne at 7:39 PM

Email ThisBlogThis!Share to TwitterShare to FacebookShare to Pinterest
Labels: Beyond the harbour entrance at Matakana Island