Having fun at the Bay of Plenty Sun Club's 40th anniversary 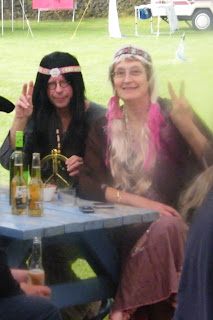 What a great event the 1970s themed occasion was over Labour Weekend at BOPSC. As well as several former members from the early 1970s (one from the late 60s), there was a good attendance of current members and visitors, most of whom are also members of BOP Naturists. After the cutting of the anniversary cake on the Saturday, fifty people were seated in the clubhouse for a 3 course meal which was catered for by the committee members and helpers. Then we were entertained by a current member who played some country music and then by a former member who entertained us all with some rocking Elvis songs.
On Sunday morning, a cooked breakfast was served before the members held a craft market. This was followed by a lunchtime sausage sizzle and for dinner, left-overs completed the food offered over the weekend. A large group then watched the Rugby World Cup final in the clubhouse and that kept us all on the edge of our seats. It was a great weekend of socialising, feasting and celebration at the friendliest little club in the country.
Posted by Glenne at 4:34 PM

Email ThisBlogThis!Share to TwitterShare to FacebookShare to Pinterest
Labels: Hippies at the BOPSC 40th anniversary