Nature and naturism at their best at our Oropi swim night 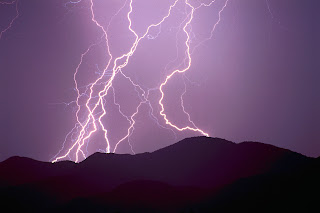 You should have seen some crazy naturists at our hot pool event at Oropi last night. Thunderstorms and hail had been forecast for the evening, but with a very warm sunny day in Tauranga, no-one believed it. That was until Peter arrived at Oropi and said that he had just driven from Rotorua and Mt Ngongotaha looked like it had snow on it and lahars of ice were flooding the streets in Rotorua.
All was calm in Tauranga however, but as about 40 of the group were relaxing in the warm outdoor pool, the skies darkened and huge drops of water started falling on the pool surface. A huge flash of lightning and the subsequent thunder about 5 seconds later, had some of us deciding the storm was getting a bit too close for comfort.
Then with a huge flash and clap of thunder very soon after, the sensible ones decided that the pool was not the best place to be in a thunderstorm and quickly gathered under shelter as the hail arrived in force.
However some hardened naturists remained in the pool in all the mayhem, hail landing on their heads, apart from Chris, who had the sense to keep his hat on. The steam was rising not only from the pool surface but also from the heads of the crazy naturists who were warm compared to the rest of us standing out in the cool air.
With dinner arriving from the kitchen, the sensible ones decided to retreat to the dining area to have their meal and by the time we had eaten, the mayhem was over and we spent the rest of the evening soaking in the warm pool as the stars appeared. Lying back and looking up, we tried to work out which two planets were shining brightly overhead and waited for a glimpse of a passing satellite which Peter insisted would come by anytime.
We never got to see a satellite, but all agreed that this night in Oropi had been one of the most dramatic we had experienced yet.
Posted by Glenne at 11:59 AM