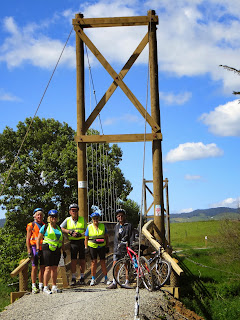 Although not an advertised naturist event, Col and I joined 4 other members of the Bay of Plenty Naturists group for a bike ride along part of the Hauraki cycleway. We rode two legs of the cycleway from Waihi Railway Station through to Waikino then on to Karangahake a distance of 30km return.

It was a lovely day as we set off along the newest section of the track from Waihi to Waikino. It was however a bit steep with a lot of up and downs to start with while it followed the river. But as it got onto an old rail siding to the old stamping battery, it leveled out. However, being a new track, the shingle was a bit loose and dangerous, as Lyn found out just before we got back. She was dismounting to walk over the final bridge and skidded in the loose shingle, damaging her knee and grazing her leg and arm. So if you are cycling on this section, take care! 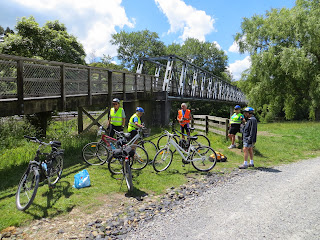 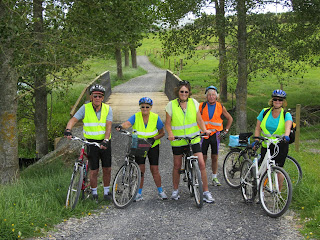 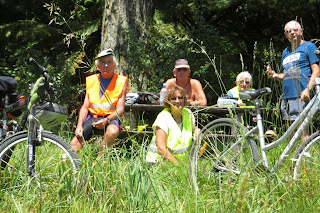 The section from Waikino through to Karangahake is a well established flat ride along the old Karangahake Gorge railway line. Here we reached high speeds in the perfect conditions and felt much safer on the hardened shingle.


We stopped for lunch at a picnic table amongst long grass, before riding up to the tunnel at Karangahake.
After I fell off my bike several years back, when I dismounted too far into the tunnel and couldn't see the sloping edge, falling and breaking my arm, I now walk through tunnels, which we all did! 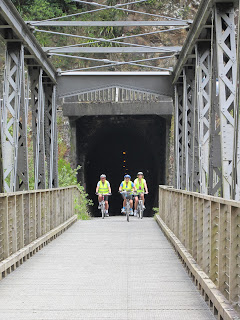 On the way back we stopped for a coffee at the Waikino railway Station cafe before heading back to Waihi. All in all a memorable days exercise but not one that could be done naked due to the large numbers of people using the trail. 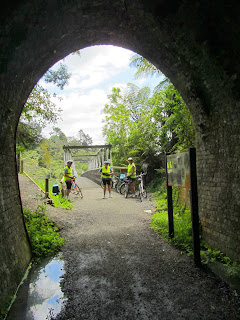